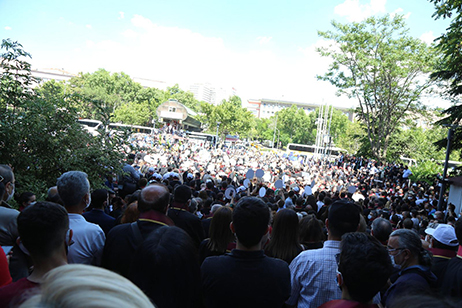 Joins Statement by the Bar Associations in Turkey

Anyone who is only one step away from being a hashtag, women who have not yet been killed, trees that have not been destroyed, passers-by and even the ones with no name,

What brings us together here today is our duty to tell our children in front of the history that we have never surrendered and we never will to the stick that a repression regime puts out from under the table at every single opportunity.

We are the members  of a profession that has taken an oath not to devote even a blind bit of the right to be an individual, freedom, equality, human dignity and the state governed by the rule of law  to any group, person or pressure as all of the above are vested in us by the Republic.

That is why the history of protecting human dignity against the powerful of the earth and the sky begins with lawyers. However, the fear of those powerful from lawyers has been so great in every period; sometimes they threatened lawyers with imprisonment and executions, and sometimes they hopelessly rely on a virus outbreak.

Attempts to divide, silence and disqualify us, and the stick shown to us at every opportunity is an indication of fear mixed with the discomfort that we place in the heart of the powerful. It is our honor.

You have never liked the defense, we know it.

You separated your doors at the first opportunity.

Then you tried to silence.

Once you have not succeeded, you tried to throw us out of the courtrooms,

If you cannot, you tried to arrest us,

You tried to send us to the hospitals on the pretext that we adopt the profession sickly.

In the exhaustion of all above, you have chosen to sentence us to decades in prison.

Now, you are trying to divide the bar associations- that you were not able to cow into submission- to make buttonholes and sew buttons to our robes.

You want that the last independent constituent of the judiciary would be tied to the political power.

You want everyone to be silent.

You want this darkness to last.

We have told the others before you in the courtrooms;

Now we say the same to you:

Keep in mind that the first words uttered by the former owners of this project were "I want my lawyer" when they were caught.

Keep in mind; history records those who struggle for the light, for hope, for humanity, those who defend hope.

There are lawyers in this country:

They represent the enlightenment. They represent freedom, whatever it is for the state governed by the rule of law and democracy.

They will neither let the citizens’ voice be muted, nor let your darkness continue forever.

Look at us carefully. These lawyers, who you think you will finish by counting one by one, carry a determination as big as the sky under their robes. Now their robes are a shelter, a roof, a shield, under which there is enough space for destitute children, murdered women, devastated forests and a huge justice system that they try to wipe out .

And pay attention to what they say,

They swear to the children of this country that they will not surrender to any pressure, and that they will protect their profession and the Republic.