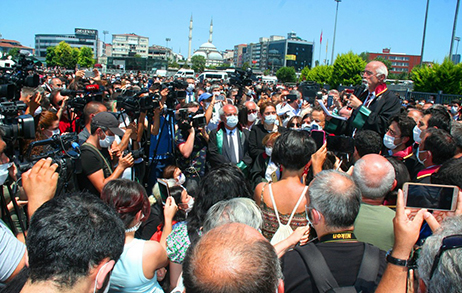 Participants did not fit in the area, and the entrance hall of the courthouse was crowded.

Addressing to the lawyers, President Atty. Mehmet Durakoğlu said, “Take a note of today's date. Today is June 30, 2020. This is the day the proposal for the multiple bar system was submitted to the parliament. This is a FETÖ project. We warn those who misuse the law making power as a weapon here. ”

Stating that the meeting was not political, it is a common outcry of all views, Durakoğlu said that they are trying to deliver a message, an outcry and a determination to Ankara with common belief and common language.

Durakoğlu explained that 80 bar presidents came together and they published two joint statements, in which they called for the withdrawal of this draft and they did not make any step back. The headlines from Durakoğlu's speech were as follows:

We don't need multiple bar associations. As lawyers and bar associations, our problems are different. There are problems in the courthouses, there are problems with trainee lawyers, young colleagues have economic problems, we do not have access to files, our right to defense is restricted, lawyers are thrown out from the courtrooms, where their right to defense is restricted, let's talk about them.

Articles 76 and 95 of the Turkish Attorneys’ Code give us the duty to uphold the rule of law and protect human rights. We have to fight for the rule of law to protect human rights. Without lawyers, bar associations as the organized power of lawyers, a woman who has been subject to violence cannot be protected. Femicides cannot be prevented. Therefore, we have to support the Istanbul Convention that protects women. In the absence of lawyers, torture cannot be prevented, there would be noone struggling for human rights, and the environmental massacres would not leave any green spot alive. We go to the midnight interrogations for peanuts, we know what we have to put up with. Therefore, lawyers shall not remain silent, they cannot. We said, let's amend these in our law, let's talk about it.

In the 2010 referendum, we said “you are handing over the judiciary to FETÖ, don’t do that”, we warned them. They said "You cannot name it as FETÖ, he is our honorable master". We said, 'You are making unlawfulness in the Sledgehammer and  Ergenekon cases”, we raided these cases, we raided that tent theater, we went under proceedings, we were acquitted. Some of those judges who judged us are in jail and some have fled abroad. We are lawyers, we do not bend, do not obey, they cannot intimidate us.

Draft proposal on the multiple bar association system was submitted to the Turkish Grand National Assembly today. Today is 30 June 2020. This is a FETÖ project. This is the project that was mentioned in the State Audit Report in 2009.

Durakoğlu, who gave detailed information about the march, continued as follows: As you know, the lawyers who set out from their cities and moved to Ankara were stopped by the police on Eskişehir Road, 20 kilometers before Ankara. Bar associations could not enter Ankara. We were stopped by an unlawful order, and one of our colleagues, a bar president, was also assaulted. There were shields and obstacles in front of us. We have been through 28 hours under the burning sun followed by rain. Umbrellas and raincoats were not allowed, chairs were not allowed, blankets were confiscated and we  were even denied to drink tea. […] I am talking about an unlawful order, a cruelty. We told them: We are lawyers and Bar Association Presidents. We cannot go back, will it be three months, will it be five months, will it be eight months, we cannot return. If we return, we cannot look at the face of our colleagues. After 28 hours they removed the barricades. You know why? Because we said “If you do not remove the barricades till 14.00, we will make a call to all lawyers in Turkey to gather here for a meeting. After a while, they removed the barricades and opened the way.

We will always keep our belief in democracy upright. We will always respect the Grand National Assembly of Turkey, but we will oppose those who try to misuse their authority to legislate as a weapon on any platform. Because we are lawyers, we defend law. We will use our democratic rights to the fullest. As the lawyers of this country, we will prove that the proposal submitted to the Assembly is against the universal law, the constitution, the unitary state structure, because we are lawyers.

The September 12 coup plotters had done worse than what they did to the Istanbul Bar Association. They had raided the bar, took away their files and sealed the door. They thought we destroyed the bar. These lawyers broke those seals. But our former president Atty. Orhan Apaydın, who was jailed pending trial in Peace Association Case, martyrized. Since that day, we have always carried him over our heads as an icon of justice. The code of lawyers changed after this struggle. If lawyers get stuck in the legal struggle, they feel themselves duty-bound to Orhan Apaydın. We will continue our struggle to the end and we will win this struggle.

After Durakoğlu's address, lawyers who gathered in the area left the area in a silent manner. The meeting was attended by various lawyers' groups, platforms, initiatives, associations and professional chambers